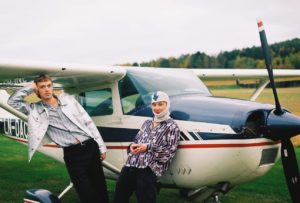 Written, recorded and mixed in just eight hours, the “both eyes” that the lyrics mention confront the harsh realities of the digital world; the idea that we show two sides of ourselves, the real one and then our online persona that typically doesn’t divulge the more difficult times of our lives.

Lasse Lokoy is the bassist of Norwegian party-punks Sløtface, but flexes his muscles as a producer and songwriter of colourful and futuristic art-pop. Kacper Tratkowski is Safario,  a Norwegian rapper who creates upbeat yet lo-fi music.